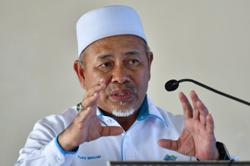 ARCHAEOLOGISTS have found various traces of early humans in a karst mountain cave in Quang Khe Commune in the northern province of Bac Kan.

They have excavated Tham Un Cave and found that the cave’s foundation was recently stirred up by cattle raised by locals.

As a result, a cultural layer from an earlier time was revealed.

Archaeologists found two cultural layers lying directly on top of one another, without any border layer.

The earlier cultural layer lies lower and is fairly hard, formed by clay. The dark brown layer contains objects like stone tools together with animals’ teeth and snail shells.

The cultural layer on top is a light grey colour and made of crumbled soil. It contains fewer objects.

Traces of four fireplaces were found at different positions and depths.

Although no tomb was found in the cave, a total of 700 objects were recovered, most of which were stone tools made from pebbles taken out of rivers and streams.

“Stone tools in the lower cultural layer have features typical of the Bac Son culture (10,000-8,000BC),” said Assoc Prof Trinh Nang Chung, head of the excavation team.In the higher cultural layer, a well-polished axe was found, the first of its kind to be excavated from the Bac Kan mountains.

Various pieces of broken ceramic wares were found too. The core ceramic material was mixed with various kinds of vegetables, formed by hand with decorative patterns of twisting and gentle curves.

Archaeologists hypothesised that hunting and gathering fruits and vegetables were important food sources for these early humans.

Chung said researchers concluded that the cave was a residential area for many generations.