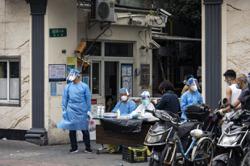 BEIJING (Bloomberg): Beijing punished a dozen officials over two Covid-19 clusters as China’s capital continued to report new infections in its now monthlong outbreak, while the nearby port city of Tianjin locked down a central district amid a simmering flareup.

One cluster at a courier service outlet saw the head of Beijing’s postal administration warned for not properly supervising virus-prevention work and not paying enough attention to the growing case numbers, according to a statement posted on the website of the Central Commission for Discipline Inspection, China’s top anti-graft agency.

Eight officials involved in a China Railway-linked cluster were punished for lying about their movements.

The capital reported 47 new Covid cases for Tuesday (May 24), compared with 48 on Monday and 99 on Sunday, the highest of the current outbreak. While the numbers are still low, Beijing has been recording several dozen infections a day for the past month, suggesting mass-testing drives, work-from-home orders in some districts and other measures haven’t been enough to extinguish the outbreak.

The city has pledged to strengthen virus controls among essential workers such as security guards, maintenance staff and workers at internal dining halls.

Beijing’s persistent infections underscore the challenges of achieving Covid Zero, and have swiftly turned the capital into a core area of focus for authorities as Shanghai’s outbreak ebbs.

In Tianjin, where an outbreak in January disrupted global auto giants Toyota Motor Corp. and Volkswagen AG, residents in the central Heping district have been told not to leave their housing compounds or neighborhoods unless necessary and have been encouraged to work from home for three days.

Elsewhere, Shanghai reported 387 new cases, down from 480 on Monday. One infection was found outside of government quarantine in the financial hub.

While the city has been officially easing the lockdown that kept its 25 million residents confined to their homes for almost two months, zealous grassroots volunteers who police housing compounds are still preventing many people from going outside