Small softshell tortoise were released into the Mekong River to celebrate World Turtle Day on May 23. - WCS

WCS country director Ken Serey Rotha told The Post on May 23 that this was not the first time that the WCS and the FiA had co-organised a programme to release the hatchlings into the wild.

The programme has been running for 15 years, since researchers discovered a large population of the rare animals along the banks of the Mekong River in Stung Treng and Kratie provinces.

“We released 580 hatchlings on May 23 to mark World Turtle Day – as the turtles are under threat from poaching and trafficking,” he said.

In a report, WCS Cambodia said that in 2021, this species was considered under threat from illegal hunting and trafficking. Also last year, at least nine individuals were seen being traded online, and two were found dead through illegal fishing.

The report said that with continuous support from donors – and excellent cooperation from the FiA – plus the strong commitment of its field staff and community nest protection team, WCS Cambodia has made significant progress in conserving this critically endangered species. The hatchlings conservation project was funded by the EU, through the Margaret A Cargill Philanthropies and the Turtle Survival Alliance.

Serey Rotha added that since 2007, the team has found and maintained 627 nests and released 13,255 hatchlings into natural shelters along the Mekong River.

In the 2022 spawning season, the nest protection team found 63 nests of hatchlings consisting of 2,155 eggs. From the beginning of March through May 20, a total of 982 eggs hatched from 40 nests. The team had released 402 hatchlings back into shelter prior to the 580 which were released on May 23.

“The growth of these nests and eggs encourages us to continue our efforts to conserve this endangered species,” he said.

Ouk Vibol, director of the FiA’s Department of Fisheries Conservation, expressed his appreciation for the participation of local authorities and communities – as well as WCS Cambodia – in the conservation of the turtles, ensuring that the species will persist in their natural environment.

All stakeholders should continue their efforts to conserve them, and those who perpetuated the illegal trade of the species should be prepared to face serious legal consequences, he added.

Clemens Beckers, representative of the EU Delegation to Cambodia, said the Kingdom has an incredible wealth of species and habitats. The Giant Softshell Turtles are one of the species that need protection urgently, and joint conservation efforts must continue to help the wild population recover.

“We all share the common goal of saving this species from extinction, and the EU remains committed to working with our partners to achieve this,” he said. 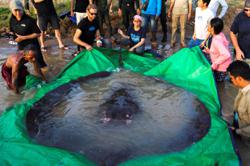