A currency trader watches monitors in front of screens showing the Korea Composite Stock Price Index (KOSPI), left, and the exchange rate of South Korean won against the US dollar at the foreign exchange dealing room of the KEB Hana Bank headquarters in Seoul, South Korea, Thursday, May 19, 2022. Shares dropped sharply in Asia on Thursday after a broad retreat on Wall Street triggered by dismal results from major retailer Target that renewed worries over the impact of high inflation. - AP

SINGAPORE, May 19 (AP): Shares dropped sharply in Asia on Thursday after a broad retreat on Wall Street triggered by dismal results from major retailer Target that added to worries over persisting high inflation.

Shares fell in all regional markets except Indonesia's. Oil prices were higher.

The Dow Jones Industrial Average sank more than 1,100 points, or 3.6%, and the S&P 500 had its biggest drop in nearly two years Wednesday, shedding 4%. That was its steepest decline since June 2020. The tech-heavy Nasdaq fell 4.7%.

The benchmark index is now down more than 18% from the record high it reached at the beginning of the year. That's shy of the 20% decline that's considered a bear market.

"The sentiment in the market is highly negative as traders and investors are largely concerned about an economic downturn and soaring inflation," Naeem Aslam of Avatrade said in a commentary.

The Federal Reserve is trying to temper the impact from the highest inflation in four decades by raising interest rates. Many other central banks are on a similar track.

But the Bank of Japan has stuck to its low interest rate policy and the gap between those benchmark rates of the world's largest and third-largest economies has pushed the dollar's value up against the Japanese yen.

Japan recorded a trade deficit in April as imports ballooned 28% as energy prices soared amid the war in Ukraine and the yen weakened against the dollar.

Japan’s exports grew to 8.076 trillion yen ($63 billion) last month, up 12.5% from the previous year, according to Ministry of Finance data released Thursday. Imports totaled 8.915 trillion yen ($70 billion) in April, up from 6.953 trillion yen in April 2021, and the highest since comparable numbers began to be taken in 1979.

Target lost a quarter of its value after reporting earnings that fell far short of analysts’ forecasts. Inflation, especially for shipping costs, dragged its operating margin for the first quarter to 5.3%. It had been expecting 8% or higher.

Target warned that its costs for freight this year would be $1 billion higher than it estimated just three months ago. And Target and Walmart each provided anecdotal evidence that inflation is weighing on consumers, saying they held back on purchasing big-ticket items and changed from national brands to less expensive store brands.

The report comes a day after Walmart said its profit took a hit from higher costs. The nation's largest retailer fell 6.8%, adding to its losses from Tuesday.

The weak reports stoked concerns that persistently rising inflation is putting a tighter squeeze on a wide range of businesses and could cut deeper into their profits.

Technology stocks, which led the market rally a day earlier, were the biggest drag on the S&P 500. Apple lost 5.6%, its biggest decline since September 2020.

Bond yields fell as investors shifted money into lower-risk investments. The yield on the 10-year Treasury fell to 2.88% from 2.97% late Tuesday.

The disappointing report from Target comes a day after the market cheered an encouraging report from the Commerce Department that showed retail sales rose in April, driven by higher sales of cars, electronics, and more spending at restaurants.

Investors worry the Fed could trigger a recession if it raises interest rates too high or too quickly. Worries persist about global growth as Russia's invasion of Ukraine puts even more pressure on prices for oil and food while lockdowns in China to stem COVID-19 cases worsens supply chain problems.

Such factors led the United Nations to cut its forecast for global economic growth this year from 4% to 3.1%.

In other trading, benchmark US crude oil rose 42 cents to US$110.01 per barrel in electronic trading on the New York Mercantile Exchange. It dropped US$2.81 to $109.59 on Wednesday.

Brent crude, the basis for pricing for international trading, climbed US$1.14 to US$110.25 per barrel. 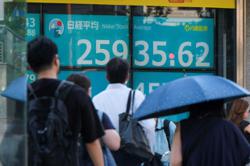