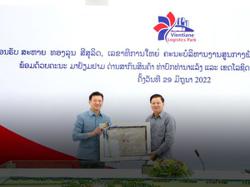 VIENTIANE (Vientiane Times/Asia News Network): The Chairman of Vietnam’s National Assembly, Vuong Dinh Hue, has called for businesses in Laos and Vietnam to make breakthroughs in trade, investment and economic cooperation to ensure practical benefits for both countries.

Hue made an official visit to Laos during May 15-17 in response to an invitation from his Lao counterpart, Dr Xaysomphone Phomvihane.

During his visit, he called on Lao President Thongloun Sisoulith, and met National Assembly president Dr Xaysomphone, Prime Minister Phankham Viphavanh and other senior leaders and representatives of Vietnamese businesses in Laos.

Hue was quoted by the Vietnam Plus News as saying that it is critical to develop economic, trade and investment links to the same level as the political and diplomatic relations between Vietnam and Laos.

Hue said special relations need special mechanisms to create favourable conditions for Vietnamese enterprises to do business in Laos, but these firms also need to proactively improve their competitiveness.

The governments of Laos and Vietnam have agreed to boost two-way trade by 10 percent to 15 per cent during 2021-25 by creating favourable conditions for the people of the two countries, including those living in border areas, to boost their trade exchanges.

Vietnam is ranked third among 54 countries and territories investing in Laos, with total investments of US$4.3 billion, the Lao Minister of Planning and Investment, Khamjane Vongphosy, told the media recently.

Vietnamese enterprises have invested in 417 projects in Laos, ranging from agriculture to mining, energy, infrastructure and services.

In 2021, the Lao government authorised investment in three projects by Vietnamese firms, including two in the mining sector and one in banking.

The governments of the two countries agreed to address all shortcomings facing plans for mega projects, notably those related to energy, mines and infrastructure, so that they continue to progress as expected.

Khamjane said although the development of the region and the world is complicated by changes, the great friendship, special solidarity and comprehensive cooperation between Laos and Vietnam has continued to deepen.