More than a million people have been sickened by what Pyongyang is referring to as “fever”, despite leader Kim ordering nationwide lockdowns in a bid to slow the spread of disease through the unvaccinated population.

In a sign of how serious the situation may be, Kim “strongly criticised” healthcare officials yesterday for what he called a botched response to epidemic prevention – specifically a failure to keep pharmacies open 24/7 to distribute medicine.

He ordered the army to get to work “on immediately stabilising the supply of medicines in Pyongyang”, the capital, where Omicron was detected last week in North Korea’s first reported cases of Covid-19.Kim has put himself front and centre of North Korea’s disease response, overseeing near-daily emergency Politburo meetings on the outbreak.

The failure to distribute medicine properly was “because officials of the Cabinet and public health sector in charge of the supply have not rolled up their sleeves, not properly recognising the present crisis,” state media KCNA reported Kim said. 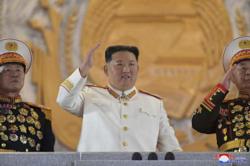