The IONIQ 5-model car is classified as a battery electric vehicle (BEV), meaning it is fully electric, whereas earlier models from other manufacturers are hybrid models partly or largely still powered by combustion engines.

PT Hyundai Motors Indonesia (HMID) said in a statement on March 31 that the car was produced at the Hyundai Motor manufacturing plant in Cikarang, West Java, which had an output of 250,000 vehicles annually.

The government seeks to turn Indonesia into a global EV player by increasing domestic demand and by developing factories for EVs and EV batteries.

Indonesia targets to have 400,000 electric four-wheelers and 1.76 million two-wheelers on the road by 2025. The government also aims to produce 2 million EVs by the same period.

The ICONIQ 5 is the latest to Hyundai's all-electric lineup that includes the Hyundai IONIQ Electric and KONA Electric.

Hyundai has not yet disclosed the price of the new model, but HMID chief operating officer Makmur told tempo.co that the price would be higher than its predecessors. The models are slated for distribution in April.

According to the Hyundai website, several earlier models were sold in Jakarta at between Rp 715.7 million (US$49,834) and Rp 734.9 million for the Hyundai IONIQ Electric and KONA Electric, respectively. The higher prices of EVs compared to their fossil fuel-powered counterparts are often seen as a deterrent to more EV purchases.

Indonesia has introduced several fiscal and non-fiscal incentives to boost consumer appetite for such vehicles. 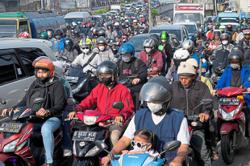