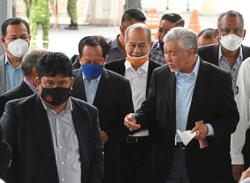 DPP Dayangku Didi-Nuraza Pengiran Abdul Latiff’s case against the defendant allege with cheating two victims to part with their money amounting to BND1,300 by offering them in a non-specific investment scheme.

The defendant is further purported to have made a single victim to part with BND30,400 under the pretense of being able to invest the money into Forex trading.

The allegations as claimed by the victims occurred in June 2018, with the defendant promising monthly returns from then on to each and every deal he made with the victims.

It is also alleged that the defendant transferred BND15,860 of the money to his wife’s bank account in three transactions in June 2018.

The cheating charges carry penalties of up to seven years’ jail and fines, while the charges under the Criminal Asset Recovery Order each carry a fine of at least BND500,000 and up to 10 years’ jail, or both.