Protesters hold banners as they take part in a demonstration against the military coup in Yangon December 5, 2021. - AFP

YANGON, Dec 5 (dpa): At least five people died and dozens were injured when Myanmar soldiers crashed into a flash mob protest in Yangon on Sunday, according to witnesses and local media reports.

Myanmar was plunged into chaos and violence after February's coup.

The military has responded to most resistance with force, resulting in hundreds of deaths to date.

Anti-coup protests still go on across the country. They are often guerrilla-style, with small number of protesters facing potentially deathly crackdowns.

"A car with very fast speed rammed down the protesters and shots were fired.... Then soldiers ran after the protesters. I witnessed three dead bodies on the road,” a witness who asked not to be named for security reasons told dpa.

Videos and photos from the scene, which have gone viral on social media, shows a military-green vehicle ramming through the protesters. Soldiers jumped off it, arresting and beating people, according to witnesses.

At least a dozen of protesters were arrested.

Despite the morning violence, there was another separate small protest in Yangon.

According to estimates by the prisoners' aid organization AAPP, more than 1,300 people have been killed and thousands arrested. - dpa 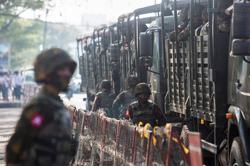 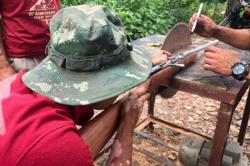