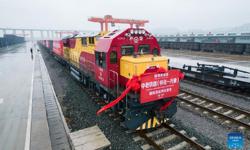 "I am delighted and excited to be a practitioner of the Belt and Road Initiative, and an emissary of friendship between China and Laos," said Zhou Yukui, 31, the freight train driver with six years of driving experience.

"The China-Laos Railway runs similar to the domestic railways and the railway conditions are even better. But in order to ensure the safety of the first train, since setting off from the Laos-China border at 1539 (GMT 0839), we dare not to take a rest," Zhou said.

Li Tongxu, Director of Vientiane South Station with more than 20 years' experience on the railway and over 10 years as a station director in China, came to Laos in July this year. He told Xinhua that the station has been fully prepared to welcome the first train from China.

The station currently has 68 staff, including nine Chinese technical and management personnel who have rich work experiences. The rest of the Lao staff, with higher education and high enthusiasm for learning after training in the China-Laos Railway Co., Ltd., have also been competent for their respective positions.

"Today we are receiving 50 six-meter railway containers of dicalcium phosphate here, which reflecting the complementary relationship of the two markets," added Li.

Currently orders bound for China from Vientiane South Station are more than 100,000 tons while shipment orders from China to Laos are also a lot, especially for fertilizer, chemical, mechanical and electrical products.

China-Laos Railway was opened to traffic on Friday and the first international freight train from Vientiane loaded with Lao exports arrived in China on Saturday afternoon. - Xinhua 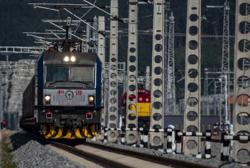