BEIJING (Bloomberg): The US military flew a record number of spy planes over the South China Sea in November, a Chinese think tank says, as tensions between the world’s two largest economies simmer.

US aircraft carried out 94 sorties last month, the South China Sea Strategic Situation Probing Initiative said in a post on its verified Weibo account. That was a 25% increase from the February record, according to figures provided by the group, which has reported data on activity on the body of water since 2019.

The most on any single day came on Nov 4, when the US sent 10 planes over the sea, according to the think tank, as the USS Carl Vinson aircraft carrier strike group sailed through. That topped the Jan 23 figure of seven.

A spokesperson for the 7th Fleet said in an email to Bloomberg News on Friday that "US Navy ships and aircraft routinely operate within the international waters of the South China Sea, and are committed to supporting its network of alliances and partners and upholding a free and open Indo-Pacific.”

President Joe Biden is taking a strong stance to oppose China’s broad territorial claims in the disputed waters. The US. has conducted at least five transits involving ships this year through the sea, where Vietnam, the Philippines and Taiwan have sovereignty claims.

The US also expanded its flight range last month by sending a patrol aircraft over the Taiwan Strait that came within about 16 nautical miles (29km) of China’s territorial waters, the think tank reported. It didn’t say what the previous distance was.

The People’s Liberation Army planes regularly fly near Taiwan, which the ruling Communist Party considers a breakaway province despite never governing it. Last week, China sent 27 fighter jets into Taiwan’s southwest air defence identification zone, after a US lawmaker defied a Chinese demand that she abandon a trip to the island.

Taiwan’s ruling Democratic Progressive Party asserts the island is a de facto sovereign nation awaiting wider international recognition. The government in Taipei has avoided a formal declaration of independence that could trigger a war. 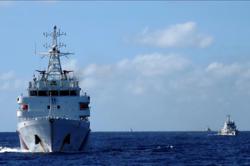