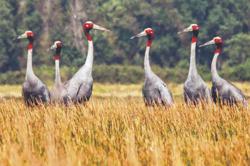 Project to take off: A group of eastern sarus cranes standing in a padi field in Anlung Pring province. — The Straits Times/ANN

Rice is a staple for many in Asia – not just people, but wildlife too.

Now, under a new initiative led by conservation group BirdLife International, some farmers in Cambodia are planting strains of rice favoured by the eastern sarus crane to help increase numbers of the endangered species.

Researchers counted 869 of the world’s tallest flying bird in a 2011 census, but this has since fallen to less than 200 due to habitat loss and poisoning.

The cranes favour the silt-laden wetlands of the Mekong Delta in Cambodia and Vietnam. There, they forage for food such as insects and feed on rice strains native to Cambodia, such as boka teourm and pong lolok, which are more expensive and have a harder texture than the jasmine rice usually cultivated for human consumption.

But as more land is used for agriculture, their natural habitat has dwindled. The local population of the birds has declined by more than 70% over the past decade, said Vorsak Bou, programme manager of BirdLife International.

Farmers welcome them on their padi fields, he said, as the birds help with pest control and their droppings make the soil more fertile.

But in recent years, as more farmers have turned to pesticides and artificial fertilisers, the cranes have been affected, with toxins building up in their bodies. This has led to premature death in some of the birds, said Bou.

Over 17ha of farmland has been designated as a protected reserve for the growing of “crane rice”. This is located in Anlung Pring province in south-east Cambodia, near the border with Vietnam.

Under the initiative by BirdLife International and its local partner NatureLife Cambodia, farmers are incentivised to practise crane-friendly farming methods.

With the support of Cambodia’s Ministry of Environment and the International Union for Conservation of Nature Netherlands, the initiative gives participating farmers 10 years of lease payments upfront. These payments include an additional 30% of their net income. — The Straits Times/ANN 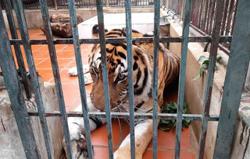