The MOUs were signed by Minister for Communications and Information Josephine Teo and Britain's Secretary of State for Digital, Culture, Media and Sport Nadine Dorries. - MINISTRY OF COMMUNICATIONS AND INFORMATION

SINGAPORE (The Straits Times/Asia News Network): Singapore and the United Kingdom will work more closely to facilitate digital trade between the countries, as part of a partnership that will make digital transactions by businesses easier, safer and cheaper.

The partnership was deepened by the inking of three memorandums of understanding (MOUs) by the two countries on Monday (Nov 29).

The MOUs will strengthen the digital connectivity between them, said Singapore's Ministry of Communications and Information and the UK's Department for Digital, Culture, Media and Sport in a joint statement.

"In 2019, 70 per cent of UK cross-border services exports to Singapore were digitally delivered," said the government organisations. The exports amounted to £3.2 billion (S$5.8 billion) in value.

"These MOUs will further support opportunities to grow digital delivery of cross-border services between the UK and Singapore, provide a basis for working closely with like-minded digital partners, and help set a global benchmark on high-standards digital cooperation to bring economic and societal benefits to both countries," they added.

The MOUs will also support the shared goals and key tenets of the UK-Singapore Digital Economy Agreement, which seeks to promote trusted, robust and connected digital markets for people and businesses.

The agreement, which is being negotiated, will establish rules to enable trusted cross-border data flows and ensure high standards in data protection.

Singapore's Minister for Communications and Information Josephine Teo and the UK's Secretary of State for Digital, Culture, Media and Sport Nadine Dorries signed the MOUs in London on Monday.

Teo is also in London to attend the London Future Tech Forum, which aims to facilitate discussion on the role of technology in supporting open societies and tackling global challenges, among other things. Participants include governments and those from academia.

Under the first MOU, the countries will share knowledge and implementation of pilot projects in areas such as electronic trade documents and invoicing.

This will help drive the development and adoption of digital trade facilitation solutions at a bilateral and international level, said the ministries.

Benefits to the digitalisation of trade include improving accessibility for small and medium-sized enterprises to engage in cross-border trade, among other things.

"The sharing of best practices will also influence the creation of secure global supply chains and interoperable digital ecosystems," added the ministries.

Under the second MOU, Singapore and the UK will work more closely to develop mutual recognition of digital identities between the countries.

The MOU is "an important step in the route to achieve interoperability of digital identity regimes between different jurisdictions", which can allow for more reliable identity verification and faster processing of applications, among other things, the ministries added.

"This would in turn reduce barriers in cross-border trade and enable businesses and individuals to navigate the international digital economy with greater ease, confidence and security."

The third MOU will enhance existing cooperation between both countries in cyber security.

It will also build on existing efforts by the nations to develop a secure and resilient cyberspace for businesses and consumers.

Teo, who is also Minister-in-charge of Smart Nation and Cybersecurity, said in the statement: "Singapore has been working with like-minded countries to advance a global digital architecture that is open, inclusive, interoperable and secure."

She also said the partnerships between Singapore and the UK "make digital transactions easier, safer and cheaper, enabling businesses in both countries to seize opportunities in the growing digital economy as we seek to recover from the pandemic".

Teo said during a media interview on Monday that there is more that both countries can cooperate on, such as emerging digital technologies, the use of artificial intelligence and a greater number of use cases for 5G technology.

Enabling more cross-border flows between the countries is also an area that “offers many interesting opportunities”, she added.

The minister said Singapore has to take the Omicron variant of Covid-19 seriously, but noted that the World Health Organisation has urged countries not to be overly alarmed.

“We have to take a rational approach - understand how this virus behaves, and then put on the best possible response to protect lives, and try to keep as many people as possible safe,” said Teo. 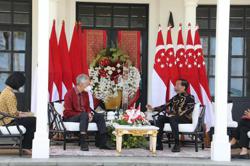