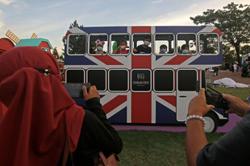 JAKARTANS have returned with gusto to the city’s public parks, which are now open after months of closure under Covid-19 restrictions, but many have expressed concerns that the parks’ reopening will be brief as the government plans to tighten curbs during the year-end holidays.

Desi Permata Sari, a 21-year-old college student, spent her class-free day at Suropati Park in Menteng, Central Jakarta, a popular spot for strolling and jogging before the pandemic.

“I actually don’t visit parks that often. But today I have no classes, and I was looking for somewhere green,” Desi told The Jakarta Post.

She said she frequented museums before the pandemic. But museums, like public parks, have been closed for much of the pandemic.

At the height of the second Covid-19 wave in July, the government imposed widespread emergency public activity restrictions (PPKM Darurat). These were followed by a four-tiered PPKM system in the following months, which allowed for different restriction levels in each region.

Public parks in Jakarta were closed to visitors during PPKM Darurat and under PPKM levels 3 and 4 – the two highest of the four-tiered system. They reopened on Oct 23 when Jakarta eased restrictions to level 2. The curbs have since been lowered to level 1.

Dwi Andika Putra, a 26-year-old who works for a private company in Kebon Jeruk, West Jakarta, was also relaxing and exercising at Suropati Park.

“We don’t have many options here because (outdoor destinations) are usually located far away from the city,” Andika said.

“Jakarta has many shopping malls, but I don’t like to go to malls for fun. As someone from a village, I prefer to go to the mountains or the beach to relax.”

He was with his wife and their three-year-old daughter. But they had come rather late in the day, so they could not enter the park and had to contend with relaxing at its edges.

“During the stricter PPKM in the past, we stayed at home most of the time. Once or twice, we tried to visit parks, but we couldn’t enter them after all,” Salman said.

Epidemiologists say public parks are appropriate places to spend time during the pandemic, provided strict health protocols are in place and the parks are not too far from residents’ homes.

“During the pandemic, people need to do outdoor activities and exercise to maintain their personal health, which in turn affects public health in general,” Griffith University epidemiologist Dicky Budiman said.

The government recently issued a new regulation, to be in force from Dec 24 to Jan 2, 2022, that outlines measures to prevent another wave of Covid-19 cases after the year-end holidays. These include calling on the public to refrain from travel during the period.

The regulation also mandates the enforcement of level 3 restrictions for certain activities. — The Jakarta Post/ANN