YANGON, Nov 27 (AFP): Japanese beer giant Kirin has confirmed it will contest a Myanmar military conglomerate's petition to dissolve the brewery they run together, as it fears liquidation proceedings in the junta-ruled country will not be fair.

Kirin has a majority stake in Myanmar Brewery Limited in partnership with MEHL, a secretive military-controlled behemoth with tentacles in industries as diverse as beer, tobacco, transportation, textiles, tourism and banking.

Myanmar Brewery, whose beverages include its flagship and ubiquitous Myanmar Beer brand, boasted a market share of nearly 80 percent, according to figures published by Kirin in 2018.

Days after the putsch Kirin said it would cut business ties with the military, accusing the junta of acting "in contradiction" to its principles on human rights.

Kirin has since "made every effort to negotiate the termination of the joint venture", the spokesperson said, but MEHL has been "uncooperative in the negotiations, effectively rejecting our proposals".

The liquidation petition is set to be heard in a Yangon court on December 10, Myanmar state-backed newspaper Myanma Alin reported on Monday.

The Kirin statement did not give details on why the petition had been filed, but said it would contest it over "doubts about the fairness and appropriateness" of the liquidation process.

Kirin's policy of terminating the joint venture "as soon as possible, transparently, fairly and appropriately" remained unchanged, the statement added.

Kirin's Myanmar business generated 32.6 billion yen ($309 million) in revenue in fiscal year 2019-2020 but it has been under scrutiny for some time over its relations with military-owned breweries.

Investors piled into Myanmar after the military relaxed its iron grip in 2011, paving the way for democratic reforms and economic liberalisation in the country of more than 50 million people.

They poured money into telecommunications, infrastructure, manufacturing and construction projects.

The coup upended the democratic interlude and earlier this year the World Bank forecast the economy will contract by up to 18 percent. - AFP 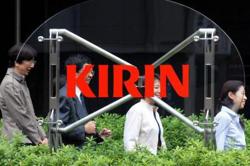