BANGKOK (The Nation/Asia News Network): The prime minister ignored reporters on Thursday (Nov 25) after they asked him why the US State Department did not invite Thailand to the Summit for Democracy in December.

On Wednesday, the State Department announced a list of 110 countries that would participate in the first online Summit for Democracy on Dec 9 and 10. Thailand did not appear on the invitation list.

China and Russia, too, were not invited.

Only three Asean countries will attend the summit – Indonesia, Malaysia and the Philippines.

When reporters asked Prime Minister Prayut Chan-O-Cha (pic) about the matter on Thursday, the premier just gave them a grim look before walking into Government House.

The US-hosted summit is aimed at helping to halt the decline of democracy and the collapse of rights and freedoms around the world. 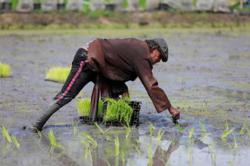