SINGAPORE (The Straits Times/Asia News Network): A former sports agent who was Olympic champion Joseph Schooling's spokesman was jailed 18 months on Wednesday (Oct 20) for cheating his friends into paying him for tickets to a football tournament and a U2 concert here.

Mohamed Hafidz Ja'afar, 38, also cheated a former client of more than $17,500 by tricking him into buying 52 pairs of shoes, but he delivered only three pairs.

Appearing before a district court, Mohamed Hafidz, who formerly also managed Schooling's swim school, pleaded guilty to eight charges of cheating. Nine other similar charges were taken into account for his sentencing.

He was acquitted of four cheating charges he had earlier been accused of.

Of the 17 charges Mohamed Hafidz admitted to, victims were cheated of more than $83,000.

The court heard that Mohamed Hafidz, who was unemployed at the time, cheated his friends into paying for tickets to see U2 as well as the International Champions Cup (ICC) - an exhibition football tournament - in Singapore in 2019.

He either never delivered the tickets or sent them fake ones.

Mohamed Hafidz told his friends he could get the tickets at a 20 per cent discount. After they transferred him the money, he made excuses for not passing them the tickets and later became uncontactable.

DPP Yap urged the court to impose 18 months' jail, noting that he had breached his friends' trust.

In mitigation, Mohamed Hafidz said he was able to deliver some tickets and had previously delivered shoes to his former client.

"I overpromised my friends which is not right. I apologise for that... For the rest, after this sentence I will be making payments to them," he added.

He worked part-time for Schooling's swim school, known as Swim Schooling, but his employment was terminated after reports of his ICC ticket scam surfaced in July 2019. 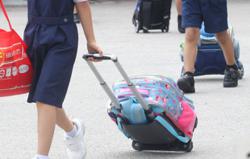