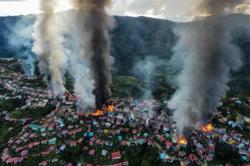 MORE than eight months since the military’s Feb 1 coup, Myanmar is sinking deeper into crisis.

Before the military takeover, the United Nations was providing life-saving humanitarian assistance to one million people.

Today, in conflict-affected areas, the number of people in need of humanitarian assistance is estimated at three million.

More broadly, 20 million people in Myanmar, or nearly half of the country’s population, now live below the poverty line – a poverty rate not seen in 20 years.

“These (20 million) are not yet part of what we would call our humanitarian caseload, but we are very worried that at least some... will be in need of life-saving humanitarian assistance in the future,” said Kirkwood, who has been in Myanmar for close to 20 years.

“The crisis we’re seeing now, is the compound effect of many things,” he said.

“It’s certainly Covid-19, and the big wave in the summer here is part of what’s to blame. Conflict, of course, has been a feature of Myanmar for a very long time. The military takeover on Feb 1 has compounded that again. So we’re really looking at a crisis on top of a crisis, with yet now a third crisis on top of that.”

The three million now in need of emergency assistance are in a number of areas, particularly in the so-called border regions of Chin, Kachin, Kayin, Kayah, and northern Shan, for instance.

But also, in a relatively new dynamic, poverty is deepening in the urban and suburban areas of Yangon, Mandalay and other cities which have seen a new form of conflict – between People’s Defence Forces and the Myanmar military.

The UN has 2,500 people in the country providing assistance of all kinds, according to Kirkwood.

“We’ve reached 1.7 million people this year with food and cash assistance, for example, plus lots of other assistance,” he said.

“But of course, access is not what we would like it to be. There are road checkpoints everywhere in the country.

“We need permission for our staff to travel to various places. There’s quite a long, lengthy and bureaucratic process for getting those permissions. We don’t have access to everyone we would like to.”

The UN is also facing a significant funding shortfall.

“We have managed to raise nearly half of the US$385mil (RM1.6bil) that we need for humanitarian assistance in this country, but that leaves close to US$200mil (RM833mil) that is a gap,” Kirkwood said. “We would need, for example, nearly US$90mil (RM374mil), just for continued food and cash assistance to people in need.”

He added: “It’s important to emphasise that the United Nations and its partners are here providing important assistance. Despite the constraints, we are able to help. Additional funding can be put to good use.”

Transport costs have doubled over the last eight months. This has hit the still mostly agrarian economy hard. Costs of inputs like seeds and fertilisers have risen. “Farmers are squeezed in the middle, and this is why we are seeing really considerable increases in poverty rates,” Kirkwood said.

“Hundreds of thousands of mostly young female garment workers have lost their jobs. Construction is pretty much at a standstill. Restaurants and other services are closed all around the country.”

In his years in Myanmar, Kirkwood has witnessed the uprising of 2007, Cyclone Nargis in 2008 which killed 150,000 people, and political and economic reforms from around 2010.

In 2011, a transitional government headed by then President Thein Sein, a former general, was sworn in, and in 2015 an election saw the National League for Democracy win in a landslide and take over the reins.

“All through this... conditions for the people of the country have been consistently improving since I arrived,” Kirkwood said.

“There are ups and downs, but the trajectory has been consistently upwards.

“And now it’s important to emphasise that almost 20 years of that progress, in many ways, has been wiped out.” — The Straits Times/ANN 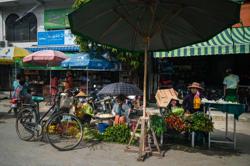