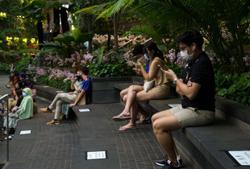 Family, friends and professional services are now allowed to pick up passengers from low-risk countries and regions in Changi Airport's arrival halls. - ST

SINGAPORE (The Straits Times/Asia News Network): Homecoming will be sweeter at Changi Airport from Friday (Oct 15) with friends and family members of passengers allowed to enter the arrival halls again after a five-month suspension.

The easing of rules comes ahead of the extension of a quarantine-free travel scheme to eight countries next Tuesday (Oct 19).

Passenger pick-ups had been severely restricted since May, following the outbreak of a large Covid-19 cluster linked to the airport.

In an update on its website on Friday, Changi Airport said family, friends and professional services are now allowed to pick up passengers from low-risk countries and regions in the arrival halls.

Professional services refer to people representing hotels, transport providers or companies. These services had been permitted to pick up passengers in the arrival halls since September.

Low-risk countries and regions are places which fall within Categories I and II of a Covid-19 risk framework by the Ministry of Health.

These places include China, the United States, Britain and Australia.

Changi Airport said anyone intending to enter the meeting zone at the arrival hall will have to present the passenger's flight itinerary.

Alternatively, they can provide a copy of their company's authorisation letter/e-mail.

Entry is allowed only after the flight has landed, and only one person is permitted to pick up each arriving passenger group.

Alternatively, people can opt to pick up the passenger using their vehicles at Terminal 1 and Terminal 3. They should contact the passengers before driving to the arrival pick-up points, said Changi Airport.

In response to queries, Changi Airport Group said: “With the Singapore government opening up more Vaccinated Travel Lanes and moving more countries into Categories I and II, we anticipate that the airport will start to receive more arrival passengers.

“Allowing family and friends to pick-up travellers from low-risk countries/regions at the arrival hall gives them an additional option.”

When The Straits Times visited Terminal 3 on Friday afternoon, staff were seen removing signboards stating that family and friends can pick up passengers only at the arrival pick-up point.

ST did not observe anyone entering the meet-up zone between 1.30pm and 3pm.

The area around the arrival hall remains cordoned off, with a staff member stationed to ensure that those entering are able to show either the passenger's itinerary or an authorisation letter.

Passenger pick-ups at arrival halls in Terminal 1 and Terminal 3 were stopped in May when the airport terminal buildings were closed to the public after the emergence of the airport Covid-19 cluster.

These pick-ups then resumed for professional services when Changi Airport reopened to the public on Sept 1.

The Civil Aviation Authority of Singapore and Changi Airport had said then that this was part of precautions to segregate arriving travellers from the public.

T2 and T4 remain closed. Both have been shut since May last year amid a drastic fall in passenger numbers due to the pandemic.

There are no immediate plans to reopen either terminal. 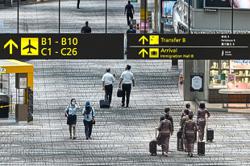