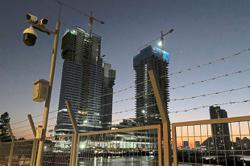 A woman walks by an Evergrande new housing development in Beijing on Sept. 22, 2021. - AP

The real-estate division head of the Ministry of Housing and Urban-Rural Development attended, as did companies including Poly Developments and Holdings Group Co, China Vanke Co. and Sunac China Holdings, according to China Business News.

The developers’ main requests include stabilizing market expectations, support for home buyers that have genuine housing needs and adjustments in land prices, the report said, citing unidentified people with knowledge of the meeting.

China’s central bank on Friday (Oct 15) broke its silence on the Evergrande debt crisis, saying risks to the financial system stemming from the developer’s struggles are "controllable” and unlikely to spread. A surprise default by Fantasia Holdings Group Co. and a warning from Sinic Holdings Group Co. that a default was imminent have stoked concerns about contagion.

The China Real Estate Association in a statement confirmed a symposium with developers took place in Beijing on Friday afternoon. The companies briefed attendees about business operations in the first three quarters of the year, and gave opinions and suggestions, it said, without elaborating.

Speculation over a meeting contributed to a rally in the shares of Chinese developers earlier this week.

A report Saturday on the Economic Observer Network said the housing ministry is drafting rules to strengthen the supervision of developers’ pre-sale funds after various forms of violations by companies. The report, which cited an unnamed source close to the authorities, didn’t provide more details. 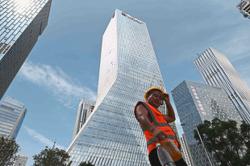