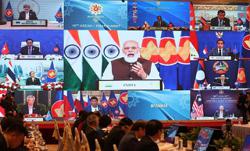 MANILA, Sept. 27 (Xinhua): The Philippines and China on Monday lauded their "robust" bilateral cooperation amid the Covid-19 pandemic.

During an online reception celebrating the 72nd anniversary of the founding of the People's Republic of China, Philippine Foreign Secretary Teodoro Locsin thanked China for its assistance, saying China "has not kept its economic progress to itself."

"In Chinese fashion, it believes that wealth is not gained by impoverishing others, but in helping to make the bridge, and therefore mutually profitable partners in progress," Locsin said in his remarks.

"The Philippines knows this well," Locsin added. "China is consistently one of our top trading and investment partners" and a "trusted supporter" of the Philippine government's "Build, Build, Build" infrastructure program, he said.

"In the darkness brought on by Covid-19, China lit the first light of hope by being the first to help. It gave crucial medical equipment and supplies, shared invaluable insights of its medical teams, donated vaccines, and facilitated the procurement of the same," he said.

The Philippine top diplomat recalled that his country kickstarted its vaccination rollout because of China's early and continuous supply of vaccines. "No doubt, it saved countless lives," he added.

"As we restart the Philippine economy during these hard and uncertain times, we can count on China to accelerate our recovery," Locsin said.

For his part, China's Ambassador to the Philippines Huang Xilian said that "robust anti-epidemic cooperation has been carried on."

Huang recalled the support of the Philippine government and the Filipinos at the height of China's battle against Covid-19 early last year, prompting China to extend "every help and support to the Philippines by promptly providing well-needed medical supplies."

China was the first country to provide Covid-19 vaccines to the Philippines.

Meanwhile, Ambassador Huang said China and the Philippines "have joined hands to safeguard solidarity and cooperation in promoting science-based origins tracing instead of politicizing this issue."

"Practical cooperation has made remarkable progress. The synergies between (China-proposed) Belt and Road Initiative and the (Philippines') 'Build, Build, Build' program have been continuously deepened," the Chinese envoy said.

Huang said the government-to-government projects between the two countries have witnessed significant progress. "Thirteen projects, while more projects are being implemented, have been launched and completed."

In the first half of this year, Huang noted that bilateral trade in goods topped US$37.5 billion, up 53.5 per cent year-on-year, and China's direct non-financial investment in the Philippines increased by 2.3 times.

"China has become the Philippines' second-largest export market while remaining its largest trading partner and largest source of imports," he added, adding that "friendly exchanges have become even closer."

"We have been committed to managing differences, enhancing mutual trust, and exploring practical cooperation through friendly dialogues and consultations, to safeguard peace and stability in the South China Sea," Huang said. - Xinhua 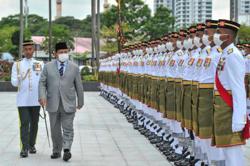