“The programme involves collaboration among the province, the Phuket Environmental Foundation and GIZ, a German agency focusing on international development cooperation,” Anuphab said.

“The pilot phase will see 15 restaurants under the ‘Take Pinto’ initiative making use of tiffin carriers [‘pinto’ in Thai], or stacked lunchboxes as containers for their meals instead of plastic packaging,” he said.

“We hope more restaurants in Phuket will join this initiative before we expand it to other provinces,” Anuphab said.

The foundation has been working with five municipal offices in the province since November 2020 to manage the amount of household waste by reducing its major source, which is plastic packaging.

This year the foundation received support from the European Union and Germany’s Federal Ministry for Economic Cooperation and Development, which has led to the collaboration with GIZ.

GIZ director Alvaro Zurita said the MoU with Phuket will promote and support sustainable consumption in the province and will become a vital factor in the reduction of marine waste, which is an environmental challenge at the national, regional and global levels. 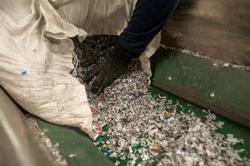