Vietnam’s supporters during the AFF Suzuki Cup Final First Round match against Malaysia’s at Stadium Bukit Jalil in Kuala Lumpur, in 2018. - The Star/ANN

HONG KONG, Sept 21 (Reuters): South-East Asia's upcoming Suzuki Cup tournament will now be held in a centralised venue after organisers scrapped plans to play on a home-and-away basis due to concerns about travel and safety amid the coronavirus pandemic.

The biennial competition, which features 11 countries, was originally scheduled to be played in late December 2020 but was postponed until this year due to the Covid19 crisis.

"We are now in the final stage of selecting the host country for our centralised tournament. We are doing everything we can, working with all the relevant authorities to ensure the safety of all the participants," the head of the Asean Football Federation, Major General Khiev Sameth, said on Tuesday when this year's draw was announced.

Vietnam, the defending champions, were drawn in Group B for this year's competition and will meet Malaysia in a re-match of the 2018 final that Park Hang-seo's side won 3-2 on aggregate.

The pair are joined by Indonesia, Cambodia and Laos.

Five-time title winners Thailand headline Group A, which also features Myanmar, the Philippines, Singapore and the winner of a playoff between Brunei and Timor Leste.

The qualification playoff will be decided in a single-leg match-up in Brunei. The date of that match has yet to be announced.

The finals tournament is slated to begin on Dec. 5. The top two teams in each group will advance to the semi-finals with the final to be played on Jan. 1.

The competition, launched in 1996, switched to a home-and-away basis for the 2018 tournament. 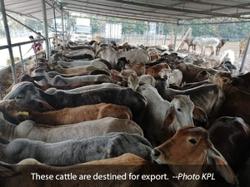