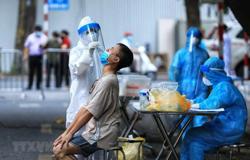 People wearing face masks wait outside an eatery in Hanoi following the resumption of take-away food services this week after they were shuttered for nearly two months due to Covid-19 coronavirus restrictions. - AFP

HANOI, Sept. 18 (Xinhua): Vietnam reported 9,373 new Covid-19 cases on Saturday, including 9,360 locally transmitted and 13 imported, according to the country's Ministry of Health.

Most of the community cases were detected in southern localities, including 4,237 in the epicenter Ho Chi Minh City, 2,877 in the nearby Binh Duong province, and 939 in Dong Nai province.

Fifteen provinces out of 63 have not detected any new infections in the past two weeks.

As many as 448,368 Covid-19 patients have so far recovered, up 14,903 from Friday, while over 33.5 million doses of Covid-19 vaccines have been administered nationwide, according to the ministry.

As of Saturday, Vietnam has registered 672,592 locally transmitted Covid-19 cases since the start of the current wave in late April, the ministry said.

More than 33.5 million vaccine doses have been administered to date, with 6,347,095 million people fully vaccinated. - Xinhua 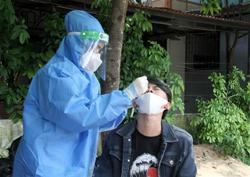 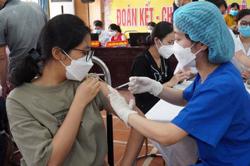