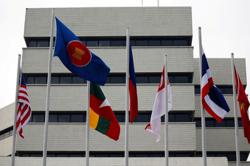 WASHINGTON, Sept 12 (Eleven Media Group/ANN): A spokesperson for the US State Department states that the United States does not accept violence as the solution to deal with the current crisis in Myanmar and calls on all sides to ‘remain peaceful.’

“The United States does not condone violence as a solution to the current crisis in Burma and calls on all sides to remain peaceful,” said the US State Department spokesperson.

“The worsening Covid-19 situation inside Burma underscores the need for a peaceful environment that allows for equitable, safe, and unhindered delivery of humanitarian assistance. We continue to urge the regime to end all violence, restore Burma to its path to democracy, and to release all those unjustly detained,” the spokesperson added in an excerpt from RFA.

The UK Ambassador to Myanmar released a similar statement on night of September 7th, which calls on all parties to engage in dialogue and supports peaceful efforts to restore democracy in Myanmar.

These statements by the United States and United Kingdom have been released after the acting president of the National Unity Government, opponents of the ruling military, declared a nationwide state of emergency and called for revolt of military rule on the morning of September 7th.

The Association of South-East Asian Nations (Asean) has been leading diplomatic efforts to end the violence and open a dialogue between the military rulers and their opponents. - Eleven Media Group/ANN