JAKARTA, Sept 12 (Xinhua): A number of tourist destinations in Indonesia on Friday (Sept 10) reopened their doors in regions that have relaxed their Covid-19 public activity restrictions, locally known as PPKM, earlier this week.

Among the reopened tourist sites is the Mount Ijen National Park in East Java province's district of Banyuwangi, which has resumed operation since Thursday (Sept 12), after being closed for two months during the early stages of the pandemic restrictions.

According to Purwantono, the Banyuwangi Natural Resources Conservation Agency (BKSDA)'s section head, the national park was visited by around 600 visitors daily on average during pre-pandemic times.

Following Banyuwangi's pandemic restrictions being lowered to level 2 this week, the national park will limit daily visits to approximately 150 people, in accordance with the 25-percent capacity limit for national parks during the PPKM Level 2 implementation.

Mount Ijen's latest opening hours are from 3am local time to 12pm. local time for all days. Hikers are required to be vaccinated at least with the first doses and bring vaccination certificates as proof.

Similarly, the Dieng Volcanic Complex, also called the Dieng Plateau, located both in Wonosobo and Banjarnegara districts in Central Java province has also reopened since Friday, following the two districts' restrictions being lowered to level 2 this week.

The complex is also implementing a 25-percent capacity limit in compliance with level 2 restrictions.

Just like Mount Ijen, the Dieng recreational area requires visitors to be vaccinated with the first shots at minimum.

Furthermore, state-owned Ancol Dreamland Park in North Jakarta has also reopened two of its attractions, Ancol Beach and Allianz Ecopark, for visitors who want to do outdoor vacations starting on Friday.

Meanwhile, other attraction sites inside the park such as the famous Fantasy Land (Dufan) amusement park, Sea World, Ocean Dream Samudra, Atlantis Water Adventures and the Art Market had remained closed as of Saturday.

The Taman Wisata Candi's Corporate Secretary Emilia Eny Utari has said that the decision on the operating permit was made for the tourist sites by the Coordinating Ministry for Maritime and Investment Affairs on Sept. 7.

The reopening of the four destinations was because they have all obtained the Cleanliness, Health, Safety, and Environment Sustainability (CHSE) certificates from the Tourism and Creative Economy Ministry, Utari said, adding that another reason is that they are located outdoor.

"We still haven't decided when the trial reopening will start, because we are still preparing the implementation process of the PeduliLindungi app. Right now, we're still awaiting the QR codes for the destinations. Once the codes are ready, trial reopening will be held," Utari said.

"We still don't have the detail, but we will announce it soon," Supriatna said on Thursday in Bandung which has been implementing level 3 restrictions since the start of this week.

On Sept. 6, the Indonesian government decided to extend its public activity restrictions on the country's most populated island of Java and famous tourist destination of Bali for another week, and as for some regions outside the two islands, the restrictions are extended until Sept. 20.

The PPKM policy has been imposed by the government in response to the surge in Covid-19 cases from late June to July, driven by the highly transmissible 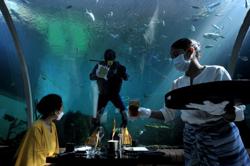