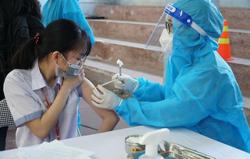 Vietnamese military personnel stand guard at a checkpoint in Ho Chi Minh City, after the government imposed a stricter lockdown to stop the spread of the Covid-19 coronavirus. - AFP

HANOI, Sept 3 (Reuters): Vietnam's coronavirus epicentre Ho Chi Minh City is proposing to resume its economic activities from Sept. 15 after a strict lockdown, in a shift from its "Zero-COVID-19" containment strategy, according to a draft proposal from the city.

The city of 9 million people is targeting the full vaccination of its citizens by the end of this year, according to the draft seen by Reuters, which has yet to be endorsed.

Earlier, it was reported that Vietnam could be facing a lengthy battle against the coronavirus and cannot rely on lockdown and quarantine measures indefinitely, its prime minister said, as the country struggles to contain its deadliest outbreak so far.

Vietnam has deployed soldiers and forced residents of its biggest city to stay in their homes in recent weeks, in its most drastic measures yet to fight an outbreak that has shattered what was one of the world's best containment records.

"We cannot resort to quarantine and lockdown measures forever, as it will cause difficulty for the people and the economy," Prime Minister Pham Minh Chinh said late Wednesday (Sept 1).

Aggressive contact tracing and quarantine procedures in the country of 98 million people had succeeded in keeping the virus under control for over a year, but the highly contagious Delta variant has hit Vietnam hard.

Total cases jumped from just a few thousand in late April to 480,000 at present, with more than 12,000 deaths, with Ho Chi Minh City by far the worst hit. Authorities reported 13,197 infections and 271 fatalities on Thursday.

Restrictions were causing "material and mental hardship," Chinh said while meeting experts to hear ideas on fighting the virus.

The measures have also forced companies in labour-intensive businesses, including suppliers for brands like Nike and Adidas, to suspend operations.

Vietnam's industrial output in August fell 7.4% from a year earlier, while its exports dropped 5.4%. Retail sales of goods and services plunged 33.7%, according to official figures.

Just 2.9% of Vietnam's population have been inoculated, while its fatality rate of 2.5% is higher than the global rate of 2.1%, according to the health ministry.

"The Covid-19 pandemic is evolving in a complicated and unpredictable manner and may last for a long time," he said. - Reuters