Of the locally transmitted cases, 40 were reported in Jiangsu, nine in Hunan, three each in Beijing, Shandong, Henan and Yunnan, and one in Hubei, according to the commission.

For the new cases in Jiangsu, four were registered in the provincial capital Nanjing while the rest were posted in the city of Yangzhou.

All of the newly identified patients have been sent to designated hospitals for treatment.

Nanjing, a mega-city with a population of more than 9.3 million, has reported a total of 227 locally transmitted confirmed cases since new cluster infections began to emerge on July 20, when a few airport cleaners at the Nanjing Lukou International Airport tested positive during routine testing.

Meanwhile, the mainland also saw 23 new imported cases, of which nine were reported in Shanghai, eight in Yunnan, three in Fujian, two in Guangdong, and one in Shandong.

Two suspected cases arriving from outside the mainland were newly reported in Shanghai on Wednesday.

No deaths related to Covid-19 were newly reported, the commission added. 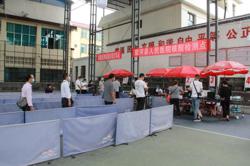