A health worker administers a dose of the BioNtech Pfizer Covid-19 vaccine to a resident at a drive-through vaccination centre in Manila City suburban Manila on July 31, 2021. - AFP

The death toll climbed to 28,141 after 48 more patients died from the viral disease, the DOH added.

The DOH said nine laboratories failed to submit reports. "The relatively low (caseload) today is due to fewer samples received on Sunday," it added.

The Philippines, which has around 110 million population, has tested nearly 16 million people since the outbreak in January 2020.

The government is racing to contain the spread of the highly transmissible Delta variant believed to be driving the "exponential rise" of Covid-19 cases in the country.

Abeyasinghe said that consecutive series of samples have indicated that there are Delta variants in many regions of the country and many cities of Metro Manila.

"It may be that there is community transmission," he told a televised news conference.

The Philippines has detected 216 Delta cases, including nine deaths.

Health Undersecretary Maria Rosario Vergeire said the "impact of the Delta variant is now observed nationally and in select regions and areas."

Vergeire said the DOH "is treating the exponential rising of cases as community transmission." 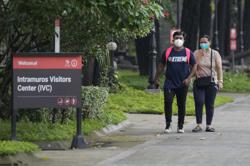