MANILA (Philippine Daily Inquirer/ANN): For bringing pride and honoUr to the nation after winning the country’s first Olympic gold medal, Filipina weightlifter Hidilyn Diaz (pic) will be promoted one notch higher from her current rank in the Philippine Air Force, the military said Wednesday (July 28).

“In lieu of her recent historic win in the Olympics, the Philippine Air Force through its Commanding General approved the promotion of Sgt Hidilyn Diaz effective July 27, 2021 to the rank of Staff Sergeant,” Armed Forces of the Philippines chief Gen. Cirilito Sobejana said in a statement.

Diaz, who won the country’s first-ever gold medal after almost a century of joining the Olympics, is active enlisted personnel at the PAF Civil Military Operations Group with a rank of sergeant.

“We laud and support this move at the General Headquarters to mark SSg Diaz’ remarkable achievements in the field of sports and for bringing pride and glory to our country,” Sobejana said.

“The AFP is proud of your accomplishments and may you continue to serve as an inspiration to your fellow service members,” he said. - Philippine Daily Inquirer/Asia News Network 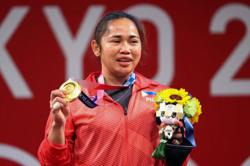