PHNOM PENH (The Phnom Penh Post/ANN): Cambodia's domestic and international air freight tonnage rose by 14 per cent year-on-year in the first half of 2021, according to air traffic data at Cambodia Airports.

Cambodia Airports is the long-standing owner and manager of the Kingdom’s three international airports.

Cambodia Airports communications and public relations director Khek Norinda told The Post that the air freight market showed renewed growth during the period, on the back of a shift to air transport spurred on by multiple factors, such as lockdowns and other restrictions in Thailand and Vietnam, as well as bottlenecks plaguing ocean shipping.

Further propelling the sector forward were the reopening of factories in the capital as the majority of workers receive coronavirus vaccines, peak holiday seasons in Europe and the US, and air cargo rates from Phnom Penh to Bangkok or Vietnamese cities that are comparable to trucking costs, he said.

Year-to-date, the US logged the greatest year-on-year surge in air cargo tonnage to and from the Kingdom, at 41 per cent, followed by Europe (38 per cent) and Asia (21 per cent), according to Norinda.

“Cargo activities are also crucial for handling vaccine deliveries and our teams are very proud to be part of the national effort to fight against the Covid-19 pandemic,” he said.

Citing Cambodia Airports cargo manager Tan Somakara, who recent had discussions with a number of airlines, Norinda underlined the overarching implications that cargo rates would have on the industry during the pandemic, as shippers and forwarders look to minimise costs.

“Our members have plans to export many tonnes of peppercorn this year, but all of them face the challenge of rising domestic and international shipping costs – a threefold surge,” he said.

In the first half of 2021, Cambodian milled-rice exports fell by 29.47 per cent year-on-year in volume, according to the CRF.

Saran said the “next big solution” is to assist and support millers with capital to buy paddy to ensure sufficient stocks for export in the second half of this year when the global shipping container shortage crisis is expected to normalise.

“As for maritime transport, the federation hopes that an appropriate solution to the transport crisis will be found, as major countries around the world begin to take action towards a resolution.” 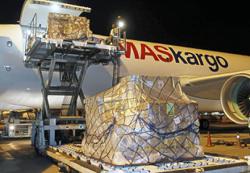