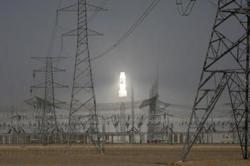 Beijing has a zero-risk approach to the virus, which emerged in the central Chinese city of Wuhan in late 2019. It locks down cities and performs mass testing whenever small clusters appear.

"Of the 40 domestic cases, 39 were from Jiangsu province and one from Liaoning," the national health commission said in a statement Monday, adding there had been no new deaths.

Tens of thousands of people are under lockdown in Jiangsu's provincial capital Nanjing as authorities test the city's 9.2 million residents for a second time after an outbreak linked to its airport last week.

"Health officials have found 57 positive cases after testing all residents in Nanjing during the first round," the local government said in a statement Sunday.

Contact tracing also found five people who travelled through Nanjing airport and tested positive after arriving in neighbouring Anhui and three other provinces, sparking fears that the cluster could lead to a fresh nationwide outbreak.

This prompted Nanjing officials to announce a second round of mass testing for all residents starting Sunday to identify patients who may take longer than usual to show symptoms.

Beijing has rushed to curb recent mini-outbreaks in border provinces, aware of the risks of the fast-spreading Delta variant.

One new case was reported Monday in the northeastern province of Liaoning, which borders North Korea, bringing the total number of local transmissions in the region to five since Thursday.

Yunnan in the southwest has reported a spike in infections traced to neighbouring Myanmar, where the military government that seized power in February is struggling to contain a coronavirus surge.

The province has reported 79 cases since June 20 with nearly half linked to Myanmar.

Beijing has tightened border controls and even supplied more than 10,000 Covid-19 vaccines to the Kachin Independence Army, a spokesman for the rebel group said Saturday.

The border town of Ruili in Yunnan is using facial recognition to track people's movements and health status as they enter and exit residential areas, supermarkets, transport hubs and other public places.

The southern manufacturing hub of Guangdong is building a quarantine clinic for international arrivals with 5,000 beds after being hit by a recent virus outbreak.

China has recorded 92,605 virus cases and 4,636 deaths since the initial outbreak.

The world's second-largest economy has staged a rapid recovery from last year's slump caused by the pandemic, while much of Asia is still battling to contain the virus.

But China's success has come at a heavy price: the country remains virtually closed to the rest of the world, with air links cut off.

Beijing is racing to inoculate 64 percent of its 1.4 billion population by end of the year. More than two dozen small cities recently announced plans to block unvaccinated people from entering public spaces including schools and hospitals, leading to a public backlash.