BANDAR SERI BEGAWAN (Borneo Bulletin/ANN): The High Court sentenced a 45-year-old man to 30 years’ jail and 15 strokes of the cane on Monday (June 21), for raping and sexually abusing his daughters.

Judicial Commissioner Abdullah Soefri Abidin found the prosecution to have proven the case beyond reasonable doubt against the defendant, whose name has been withheld to protect the victims.

Prosecutor Atiyyah binti Abas’ evidence included the two victims’ testimonies, on which the court relied in convicting the defendant who claimed trial to the 10 charges.

The prosecution’s case had always been that the defendant raped his then 14-year-old daughter, Miss X, twice in 2017, at a flat in the Brunei-Muara District, where the family lived.

One night in 2018, he performed a sexual act on Miss X, showed her a pornographic video and took an obscene video of himself.

He started victimising his other daughter, Miss Y, then aged 12, one afternoon at the flat, in February 2019.

The defendant raped Miss Y two more times at the flat, in June and August 2019.

Prosecutor Atiyyah urged the court to hand down a deterrent sentence by taking into account the offences, multiple victims and the repeated acts committed on both his daughters within the span of three years.

The prosecution continued to highlight the fact that the defendant could have reflected on his behaviour after the first incident.

Case laws were cited, mentioning that “offences of this nature are disturbingly frequent in this jurisdiction. The need for deterrent sentences is plain”.

Judicial Commissioner Abdullah Soefri took the prosecution’s submissions into consideration and agreed that there is “a gross abuse of trust and parental authority”, while further reflecting the sentence on the tender age of the victims. - Borneo Bulletin/Asia News Network 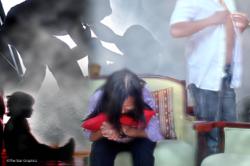