Ahead of the June 22, 2021, Executive Council meeting, Chief Executive Carrie Lam Cheng Yuet-ngor says the National Security Law is well defined and journalists should be in a position to judge whether someone has breached the law.- NEWS.GOV.HK

Hundreds of police raided the newspaper last week as part of a national security probe in which senior Apple Daily executives were arrested over allegations of "collusion with a foreign country" and HK$18 million ($2.3 million) in assets frozen.

Police have said dozens of Apple Daily articles may have violated the security law, the first instance of authorities targeting media articles under the legislation.

Rights groups, media organisations and Western governments have criticised the actions and expressed concern over freedom of the press and other rights in the Chinese-ruled city.

In Washington, State Department spokesman Ned Price said the United States was deeply concerned by "selective" and "politically motivated" use of the security law.

Speaking at her regular weekly news conference, Lam singled out the U.S. comments, telling reporters the accusations were wrong and applied double standards. She said the actions taken by authorities did not target press freedom.

"And don't try to accuse the Hong Kong authorities for using the national security law as a tool to suppress the media or to stifle the freedom of expression," she added.

On Monday, Mark Simon, an adviser to the jailed Apple Daily owner and Beijing critic Jimmy Lai, told Reuters the media outlet would be forced to shut down in "a matter of days".

Apple Daily has come under increasing pressure since Lai was arrested last year under the legislation. Lai, whose assets have also been frozen under the security law, is already serving a prison sentence for taking part in unauthorised assemblies.

According to an internal staff memo seen by Reuters, the tabloid looks set to close for good by Saturday. (Reporting by Sara Cheng and Clare Jim; Writing by Marius Zaharia; Editing by Christopher Cushing) 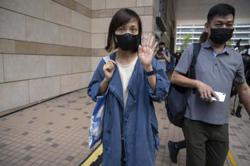