Meanwhile, 4, 948 patients have recovered and been discharged in the last 24 hours.

The Centre for Covid-19 Situation Administration (CCSA) has also has approved in principle the tourism sandbox programme that will be implemented in Phuket from July 1 and in certain areas of Surat Thani from July 15, Tourism Authority of Thailand (TAT) governor Yuthasak Supasorn said.

nder the sandbox scheme, foreign tourists who can verify they have been inoculated against Covid-19 and test negative can fly into Phuket and move around freely in the province without having to quarantine.

After staying in Phuket for 14 days and a negative test for Covid, the tourists can travel to other provinces in Thailand.

Other requirements include the visitors must have been living in countries with medium to low level of infection for at least 21 days before entering Phuket, and they must strictly follow disease control measures throughout their stay.

“As for Surat Thani province, only Koh Samui, Koh Tao and Koh Pha Ngan will be opened for foreign tourists under the sandbox scheme from July 15, and the same 14-day mandatory rule will apply, ” said Yuthasak. - The Nation Thailand/ANN 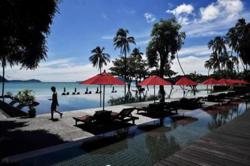