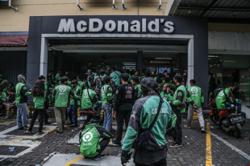 V (left) and RM (right) of BTS. Inspired by their idols' charity works, the group's fanbase in Indonesia has been sending generous tips to their drivers for picking up their special edition McDonalds X BTS menu. - AFP

JAKARTA (The Jakarta Post/ANN): The Indonesian BTS ARMY, the term used for the fanbase of K-Pop group BTS, has initiated fundraising through the crowdfunding website Kitabisa to provide lunch and distribute food packages for Gojek drivers who helped deliver their purchases of a special edition McDonalds menu.

At the time of going to press, and still three days to the deadline, over Rp151 million (US$10, 579.79) had been raised. The final amount will be donated to online motorcycle-taxi drivers, according to the Kitabisa page, though no further details have been added.

One day before the BTS special menu was released, the Indonesian BTS ARMY (ARMY is short for Adorable Representative MC for Youth), through its Twitter account, urged the ARMY not to indulge in panic buying and to give generous tips to online drivers.

Aida Nuraini, a BTS fan from South Jakarta, said that fans tried to remind each other to “not be mad” at the drivers if they take too long to purchase the order, considering the frenzy that resulted from overwhelming orders.

Explaining the reasoning for the generous tips Aida said BTS was involved in many charities that help out women and children in need. Aida herself tipped her driver Rp 30, 000. The generous tipping has gone viral online, with screengrabs of fans sending sizeable tips to their drivers.

Aida said she ordered her meal first thing in the morning that the menu premiered. She had worried that the driver would cancel her order due to the overwhelming queue but by then word had gotten around about the generous tips from the fans and many drivers stuck through the wait.

The BTS Meal menu is essentially similar to a regular menu but is accompanied by BTS members’ favourite condiments, such as sweet chili and Cajun sauce. The food wrapping and cups come in purple with the BTS logo on them.

"I really want to have that purple package for memorabilia. And the nugget sauce was chosen by BTS for overseas fans, so we can try the Korean flavour," Aida told the Post. - The Jakarta Post/Asia News Network 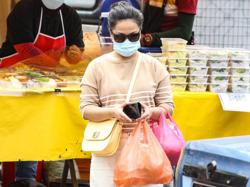