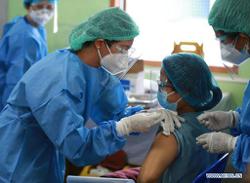 Myanmar at this point is suffering from a double disaster or a double crisis. - AFP

WASHINGTON (The Straits Times/ANN): Worries are mounting that Myanmar could become the epicentre of a Covid-19 explosion, as thousands displaced due to fresh conflict flee their towns and villages and live in jungles in remote border areas far from any healthcare system, in a state veering into collapse.

One is political instability, he said. The second is Covid-19.

Countries bordering Myanmar are putting some measures in place to control the influx of Covid-19, such as screening and quarantine facilities, he said.

"And at the same time, the humanitarian needs for the people in Myanmar need to be scaled up at this point if we don't want to see a very disastrous health situation in the country.

"But if there will be a large influx of these IDPs (internally displaced persons) moving around, that will be the point when all these public health measures plus the social distancing will be tested. And it is highly likely there can be a new cluster of Covid-19 that can come through the movement of migrants from one country to another," he added.

The United Nations Office for the Coordination of Humanitarian Affairs (UNOCHA) said in a May 27 update that in the last two months alone, around 46,000 people have been displaced by conflict and insecurity in south-eastern Myanmar.

Some 37,000 of those displacements occurred in late May following armed clashes in Kayah state in eastern Myanmar adjoining Thailand.

In Chin state, most of which borders north-east India, thousands have been internally displaced following an escalation of hostilities in the town of Mindat since May 12, the update said.

And in northern Shan state, ongoing clashes between the Myanmar Armed Forces and insurgent groups, and among these rebel groups themselves, displaced around 2,800 people in May. A total of 8,400 people who have fled since January remain displaced.

A total of US$40.2 million (S$53 million) has been mobilised under its 2021 Humanitarian Response Plan.

"This represents less than 15 per cent of the funds required," the UN agency said.

It seeks US$276.5 million to address the needs of around one million people in conflict-affected areas.

"Covid-19 is probably more widespread than anybody realises," she warned. "Asean could even face the possibility of a new strain from Myanmar."

"I don't even know if anyone has a good head count on how many IDPs there are," she added. "I know at least 8,000 of them are near Mindat, which is in southern Chin, closer to the India border - and that's just one area."

Reports of children sick with diarrhoea from contaminated water were coming in from Kayah state, she said.

The military regime, which seized power on Feb 1, is also forcing all schools to reopen this month, and is threatening parents who do not send their children to school, she said.

A Covid-19 tracker maintained by the Centre for Strategic and International Studies (CSIS) in Washington, as at Wednesday (June 2) listed no cases reported from Myanmar in the last 24 hours - a figure most analysts do not believe is credible.

Only 2.3 per cent of the population has been fully vaccinated, according to the tracker.

"The situation in South-east Asia is really worrying, and it is a stark reminder that if public health measures are not implemented fully, we will be seeing similar cases like South Asia in this sub-region as well," Dr Rimal warned. - The Straits Times/Asia News Network