The Philippine Institute of Volcanology and Seismology (Phivolcs) has monitored hundreds of quakes since last week at Taal Volcano in Batangas province, 66 kilometres south of Manila.

"Low-level background tremors" have also persisted since April 8, the institute said in its bulletin.

"Sudden steam-driven or phreatic explosions, volcanic earthquakes, minor ashfall, and lethal accumulations or expulsions of volcanic gas can occur and threaten areas within and around [the volcano island]," it added.

Thirty-nine people died due to illness while in evacuation centres and accidents caused by thick ash fall, according to the provincial government. The authorities did not specify how many of those deaths were directly related to the volcano's eruption.

It is a popular tourist destination for its picturesque crater lake. Taal also has the distinction of being the only volcano in the world within a lake on an island. - dpa 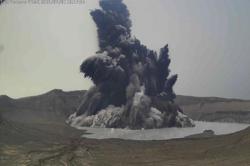