VIENTIANE, May 16 (Vientiane Times/ANN): The National Taskforce for Covid-19 Prevention and Control on Saturday night (May 15) announced that 72 new cases of Covid-19 had been reported, of which 51 involved local transmission and 21 were imported.

The total number of Covid cases since March last year now stands at 1,570.

The taskforce also reported on the vaccination programme, saying that 493,481 people had received their first dose of a vaccine and 89,166 people had been given two injections.

The vaccines being used are AstraZeneca, Sputnik V and Sinopharm and the total supply currently stands at 1,536,000 doses, which can immunise about 760,000 people, or 10.3 percent of the population.

Of the 72 new cases reported on Saturday, the highest number occurred in Bokeo with 37, Vientiane recorded 14 new cases, Champassak reported 15, and Savannakhet had six new cases.

The 72 cases were confirmed after 6,680 Covid-19 tests were carried out. At present, 1,469 people are in 44 quarantine centres around the country.

The taskforce said new strains of Covid-19 can affect everyone, including young children and older people.

The Covid-19 Taskforce is urging authorities and the general public to continue to comply with the Prime Minister’s Order on virus prevention.

It was also found that people in some parts of the country are not following the government’s guidelines, which is resulting in the spread of the virus, an official said.

The taskforce has urged authorities to closely monitor the implementation of the Order to ensure its effectiveness and public compliance with the lockdown rules. - Vientiane Times/ANN 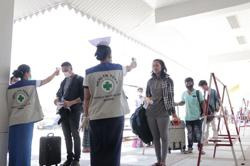