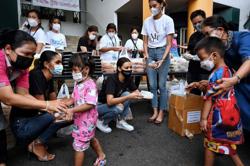 People receive a dose of Covid-19 vaccine at a vaccination center set up at the Mall Bangkapi shopping mall in Bangkok, Thailand, on Friday, May 14, 2021. Thailand plans to inoculate the majority of the adult population in Bangkok in the coming months to quell a flareup in virus infections thats made the capital city the epicenter of the nations biggest Covid-19 outbreak. - Bloomberg

BANGKOK, May 16 (The Nation Thailand/ANN): Thailand's tally of Covid-19 cases has surpassed 100,000 with 2,302 cases confirmed on Sunday, according to the Center for COVID-19 Situation Administration (CCSA).

Nearly 75 percent of the total cases have been recorded since April 1, when the third wave began and quickly spread across the entire country, Apisamai said.

With 1,218 infections, Bangkok recorded the highest number of new local cases among all provinces in Thailand, as new clusters have emerged across the capital.

Around 35,055 patients are currently under treatment, with 1,228 in severe conditions, Apisamai said.

As of Saturday, over 2.24 million COVID-19 vaccinations have been administered in Thailand, according to official data.

Dr Apisamai Srirangsan, the spokesperson of the CCSA, told a press conference that most of the illegal border crossers were Thais. The officials are now trying to convince these people to enter the country legally since it might affect virus control measures. 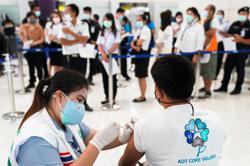