This handout photo taken and released by Dawei Watch on May 15, 2021 shows protesters holding signs during a demonstration against the military coup in Dawei. - AFP

YANGON, May 15 (Bernama): Myanmar's Foreign Affairs Ministry will hold talks with officials of the Association of Southeast Asian Nations (Asean) next week, a spokesperson of the State Administration Council said on Saturday.

"There is no official notice regarding the visit of Asean chair and secretary general to Myanmar so far, but the Foreign Affairs Ministry will have discussions with Asean officials next week," Xinhua news agency quoted Major General Zaw Min Tun told a press conference.

The spokesperson also said a total of 63 civilians have been killed in attacks across the country from Feb 1 to May 12.

Meanwhile, 57 explosions of handmade bombs and mines took place in the country in April and May, mainly targeting educational institutions and township education offices, Xinhua quoted him said.

Security operations have been planned in school surroundings and on the main roads leading to schools to ensure the safety of students and teachers when schools reopen next month, the spokesperson said.

Several incidents of explosions recently took place in Myanmar's regions and states while martial law orders were imposed in six townships of Yangon region and one in Chin state.- Bernama 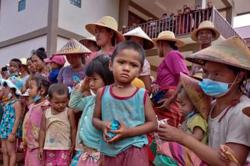