A joint team of police, military, transportation agency and Public Orders Agency (Satpol PP) personnel stops and checks a vehicle about to board a ferry at Bakauheni Port in Lampung on May 8. - Jakarta Post/ANN

JAKARTA, May 15 (Jakarta Post/ANN): Authorities are gearing up measures to prevent a surge of Covid-19 confirmed cases amid the return of mudik (exodus) travelers from their hometown following the Idul Fitri (Hari Raya) holiday.

The government predicted that people would travel back, also known as arus balik (counter-exodus), between Sunday and May 20.

Among the measures prepared by the national Covid-19 task force is to increase random Covid-19 testing on intercity travelers.

The test would be focused on passengers of private vehicles and public transportation passing through toll roads and arterial roads.

The task force will also form a special team in Lampung tasked with checking people entering Java from Sumatra following a rise of confirmed cases in many provinces across Indonesia’s westernmost island.

According to the task force, the number of active cases in Sumatra has risen by 27 per cent so far this month. On the other hand, Java recorded an 11 per cent drop in active cases during the same period.

Meanwhile, the Covid-19 mortality rate has increased by 17 per cent in Sumatra and dropped by 16 per cent in Java.

In Jakarta, the provincial administration is working with the police and the Indonesian Military (TNI) to anticipate the large volume of travelers during the arus balik to the capital.

Most travelers will travel back to Jakarta during this period. Authorities estimate that around 20 million people leave the capital annually during the mudik period, with most of them returning to Jakarta after the Idul Fitri holiday.

“We realise that the large movement of people is usually followed by a rise in the number of Covid-19 cases, ” Jakarta Governor Anies Baswedan said as quoted by kompas.com.

He added that authorities would screen private vehicles and public transportation at various entry points to the capital. The governor has also ordered task forces at the community unit (RW) level to monitor the arrival of travelers in their neighborhood and perform Covid-19 tests.

The community task force will also be responsible for reporting through an online application the health of its residents following the arus balik period.

The National Police will also extend their operation of checking vehicles at toll gates and major roads until May 24.

The operation, dubbed Operation Ketupat, was initially planned to end on Sunday (May 15).

A joint team of 155,000 personnel from the police, TNI, Public Order Agency (Satpol PP) and the Transportation Ministry have been deployed to the checkpoints. - Jakarta Post/ANN 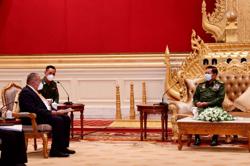