Chinese spacecraft to land on Mars on May 15-19 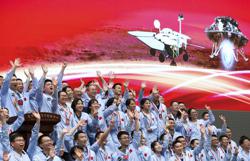 BEIJING (Global Times): In the wake of China's successful launch of the Tianhe core cabin, the first section for the country's first space station, into planned orbit, stargazers from all over the world have now turned their heads once again to Mars, looking forward to the event of China's Tianwen-1 probe's upcoming landing somewhere in the southern part of a vast plain known as Utopia Planitia on the Red Planet.

Aiming to achieve “orbiting, landing and roving” all in one mission, China's Tianwen-1 probe, which managed to smoothly reach Martian parking orbit in February, has entered crucial touchdown stage.

The probe will land on the Red Planet at a selected time between early Saturday (May 15) morning and Wednesday, the China National Space Administration (CNSA) announced on Friday afternoon.

According to the China Aerospace Science and Technology Corporation (CASC), China's state-owned space giant and contractor of the country's first Mars probe Tianwen-1 mission, Tianwen-1's Mars entry, descent and landing (EDL) will take around nine minutes, during which the Chinese explorer's speed will be reduced from 4.9 kilometers per second to zero.

Although the Mars landing is well known as "seven minutes of terror," the time spent may vary due to different design, Pang Zhihao, a Beijing-based senior space expert, told the Global Times.

What's more, because the communication delay is expected to stretch to some 20 minutes, Tianwen-1's lander will carry out the mission essentially on its own.

The landing of the Chinese craft will first involve an aerodynamic decelerating stage before it deploys parachute and variant thrust engine systems.

Such an aerodynamic decelerating stage will reduce the craft's speed by some 90 percent, said Tan Zhiyun, a designer of the general probe system from the China Academy of Space Technology, a subsidiary under the CASC.

The entry and descent stages would take somewhere between 80 to 100 seconds, and the lander will then enter a hovering stage as it reaches some 100 meters above the surface, and sensors - including the onboard camera - will "search" for a safe area to eventually execute landing on the Mars surface, according to the CASC.

Named after an ancient fire god of Chinese mythology, the 1.85-meter-tall and some 240-kilogram Zhurong Mars rover will then be deployed. It is designed to rove the planet for at least 3 Martian months, approximately 92 days on Earth.

Via a Long March-5 Y4 carrier rocket, China launched the Mars probe on July 23,2020, which was designed to complete orbiting, landing and roving in one single mission.

The rocket developer China Academy of Launch Vehicle Technology, also under the CASC, used its official WeChat public account on Friday to send its best wishes to Tianwen-1's upcoming touchdown.

The rocket stage accompanied its payload - Tianwen-1 probe - all the way to its destination, 475 million kilometers from Earth, and only bid farewell just before the probe was captured by Mars' gravitation force field.

According to the academy, after sending the Chinese craft into the Earth-Mars transfer orbit and reaching a record-breaking 11.7 kilometers per second, exceeding the second cosmic velocity, the second stage of the rocket has become an artificial planet in the solar system. "It will appear in space, 200 to 300 kilometers away from Earth, every three years."

Tianwen-1 is expected to land on a 3,300-kilometre-wide plain known as Utopia Planitia, the largest impact crater on Mars.

Once it succeeds, China will become the third nation to safely leave its "footprint" on the Red Planet after Russia and the US.

Wang Ya'nan, chief editor of Aerospace Knowledge magazine, told the Global Times that the choice of landing site has taken into consideration both the scientific values and the safety of the spacecraft during descent.

"The landing site must be somewhere that has preserved a relatively intact geological development of the Red Planet, both on the surface and deep into the ground," Wang explained.

Previous studies suggest that the Utopia Planitia is likely to be the location of an ancient ocean of Mars, where there might be traces of biological existence, and the site where Tianwen-1 is about to land is at the junction of the ancient ocean and land, China News Service reported.

The latest scientific research found a large amount of groundwater ice under the surface of the Martian plain ranging from one to 10 meters from the ground, with the water storage equivalent to the largest freshwater lake on Earth.

The southern part of the plain is mostly flat and smooth, providing a vast flat ground for the spacecraft to touch down. It is also one of the lowest areas on the planet, which has a thicker atmosphere to help slow down the spacecraft as it descends, media reports said.

Wang expressed confidence in the Chinese craft's ability to carry out the breathtaking moment. "The automatic touchdown technology on an extraterrestrial body has been fully verified in previous missions to the Moon, with the latest Chang'e-5 lunar probe soft landing turning out to be a complete success."

However, space observers admitted that risks still remain as the landing practices on the Moon are not exactly the same as those on Mars.

"Being the first attempt of [a] soft landing on the Red Planet, where there will be an atmospheric extraterrestrial environment, it will be much more difficult than previous times," Wang said.

Compared with that on the Moon, the spacecraft's descent must consider the influence of the Martian atmosphere, such as a sharp increase in temperature, the influence on communication signals, and most importantly, a large degree of interference on the landing track.

Tianwen-1 entered Mars' parking orbit on Feb 24, where it has spent over two and a half months. Space analysts said that during this time, the spacecraft has established a database of the planet's map with all-round photos and performed a "physical examination" on various detectors of each system to ensure no malfunctions exist.

Furthermore, it has repeatedly verified the pre-selected landing area and made minor adjustments according to on-site photos.

China's Mars exploration program may be less mature than Nasa's, but the Tianwen-1 mission will make a significant contribution to the science community, said David Flannery, who works on Nasa's Perseverance mission, according to an ABC News report.

"It is a capable mission that has some really ambitious science goals," he said.

Despite US legal restrictions, the CNSA and its US counterpart Nasa held working-level meetings and communications from January to March on exchanging data to ensure the flight safety of Mars spacecraft, the CNSA previously confirmed with the Global Times.

However, space analysts pointed out that these positive ice-breaking trends on Mars data exchange would very likely be affected by newly appointed Nasa chief Bill Nelson's recent malicious attack against China, and the US media's fussiness over the Long March-5B debris re-entry.

"Whether it is lunar or Mars probe missions, the US' requests on data exchange are far from anything sincere. Rather, Nasa would only care to learn the status quo of China's space technology development through these exchanges," aerospace expert and TV commentator Song Zhongping told the Global Times on Friday.

If they want to really cooperate in space, abolish those anti-China bills, such as the "Wolf Amendment," first, Song noted.

The CNSA is yet to comment on the matter. - Global Times