US agrees to remove Xiaomi from blacklist after lawsuit

WASHINGTON (Bloomberg): Xiaomi Corp and the US government have reached an agreement to set aside a Trump administration blacklisting that could have restricted American investment in the Chinese smartphone maker.

The Chinese smartphone giant had sued the government earlier this year, after the US Defense Department under former President Donald Trump issued an order designating the firm as a Communist Chinese Military Company, which would have led to a de-listing from US exchanges and deletion from global benchmark indexes. The US Defense Department has now agreed that a final order vacating the designation "would be appropriate,” according to a filing to the US courts Tuesday (May 11).

Xiaomi declined to comment. Pentagon representatives weren’t immediately available for comment after normal hours. Chinese Foreign Ministry spokeswoman Hua Chunying said at a regular press briefing in Beijing she wasn’t aware of any deal the firm may have reached with the US.

"The Parties have agreed upon a path forward that would resolve this litigation without the need for contested briefing,” according to the filing, which didn’t state whether the agreement included any conditions for removal. The parties involved are negotiating over specific terms and will file a separate joint proposal before May 20.

Shares of Xiaomi rallied as much as 6.7% in Hong Kong trading Wednesday, while the spread on its 2030 dollar note narrowed 10 basis points to 177, the smallest since January.

Market sentiment around Xiaomi could improve on an agreement with the US to remove it from a blacklist of companies restricted from American investment. Its designation as a Communist Chinese Military Company by the US early this year had no bearing on fundamentals, but preceded a 15% drop in Xiaomi’s share price since it was announced, even as mainland investors increased ownership by 27%.

Xiaomi, which makes robot vacuum cleaners, electric bikes and wearable devices alongside smartphones, had been an unexpected target for the Trump administration.

Co-founded by billionaire entrepreneur Lei Jun more than 10 years ago, with US chipmaker Qualcomm Inc. as one of the earliest investors, the company has insisted it’s not owned or controlled by the Chinese military.

A US court in March sided with Xiaomi in the lawsuit and placed a temporary halt on the ban.

US District Judge Rudolph Contreras said at the time Xiaomi was likely to win a full reversal of the ban as the litigation unfolds and issued an initial injunction to prevent the company from suffering "irreparable harm.”

The agreement marks a rare victory for China’s technology giants caught in the crosshairs of the US government, as the two nations clashed over issues ranging from trade to human rights and Hong Kong’s rule.

Trump had signed an order in November barring American investment in Chinese firms owned or controlled by the military in a bid to pressure Beijing over what the US has described as abusive business practices. The order against Xiaomi, alongside a handful of other Chinese firms, was issued in the waning days of his administration.

Trump had also gone after Chinese behemoths including ByteDance Ltd, owner of the hit video app TikTok, and Tencent Holdings Ltd., which owns the WeChat super app. Huawei Technologies Co. was the hardest hit, after it was barred from buying American-made components and shut out of infrastructure projects around the world.

There are signs the Biden administration intends to keep up the pressure on China, even as the US backs away from the blacklisting of Xiaomi. It this week extended a 2019 executive order barring US companies from using telecommunications equipment made by firms like Huawei that it accuses of posing a national security risk.

Meanwhile, Congress is moving with increasing urgency on bipartisan legislation to confront China and bolster US competitiveness in technology and critical manufacturing. 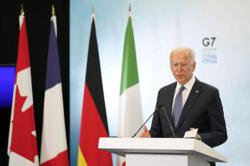