PHNOM PENH (The Phnom Penh Post/ANN): The Phnom Penh Water Supply Authority (PPWSA) announced on (Saturday) May 8 that they will not require workers and students from 870 locations in the red zones of Phnom Penh and adjacent Takmao town in Kandal province to pay their bills for March, April and May.

PPWSA said the billing exemption was at the behest of Prime Minster Hun Sen who on May 8 appealed to PPWSA and Electricite du Cambodge (EdC) to show sympathy for cash-strapped workers and students in the red zones by not charging them for utilities.

“PPWSA will compromise on the matter by paying the bills for water consumption for March, April and May for 870 rental houses where factory workers and students are staying. These locations have registered with the PPWSA and are located in the red zones of Phnom Penh and Takmao town.”

On May 8, the prime minister also called on landlords to delay collecting rent from workers if they have not received their wages. He urged all landlords to lower monthly rates to whatever extent possible or forego collection of rent for one to three months.

“I know some landlords have taken out loans from the bank to build their rental properties, so they must also be facing hardship. Landlords and banks are also debtors and creditors. But I hope that you all understand the common hardships we are all facing, ” he said.

Nou Huot, the owner of a rental house with 33 rooms in the red zone of Trapaing Thloeng 4 village in Por Sen Chey district’s Chom Chao I commune, said due to the hardship of the workers who are renting from him, he would not collect rent from May until their factories reopen.

“We actually already reduced 30 per cent off the monthly rent since May of last year. To follow the recommendations of the prime minister, I will not charge them.

“We can see that factories have been closed and that workers have no jobs. How can we force them to pay rent? They stay only in one room like me. I understand their situation and they are just working from hand to mouth, ” he said.

When their factories reopen, Huot said he will continue to reduce their month rates by 30 per cent until the situation has improved.

On May 8, Hun Sen also called on EdC to postpone charging fees for electricity consumption from workers in the red zones in order to ease their burden.

EdC director-general Keo Rattanak could not be reached for comment on May 9. - The Phnom Penh Post/Asia News Network 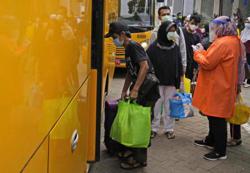