All processing lines of Vinamilk have met strict standards for exports. - VN

HANOI (Vietnam News/ANN): Vietnam’s largest dairy producer Vinamilk owns a system of 13 high-end factories across the country, which all meet the strictest international standards, producing the main product lines of the dairy industry.

This has contributed to helping Vinamilk maintain its leading position in key dairy products for many consecutive years.

According to Nielsen Vietnam, Vinamilk has continuously held the No.1 position in the liquid milk industry for many consecutive years while holding the leading position in other major industries such as baby powder, drinking yogurt, and sweetened condensed milk.

Vinamilk products are not only popular in the country, but also well received in many other major markets such as the US, Japan, South Korea and Singapore.

Vinamilk has focused on investment in its system of 13 factories with advanced technologies. These factories help Vinamilk to develop more than 250 types of dairy products belonging to 13 groups of products including condensed milk, liquid milk, powdered milk, yogurt, ice cream and soft drinks.

Two bright names are Vietnam Vinamilk Dairy Factory and Vietnam Powdered Milk Factory, both of which belong to the "super factory" category.

These two factories were put into operation by Vinamilk in 2013, creating a great breakthrough for the company in the subsequent development phase.

Located on an area of 20 ha in the southern province of Binh Duong, it has a total investment capital of more than VND4.1 billion.

Vinamilk plans to increase the factory’s designed capacity to more than one billion litres of milk per year.

Along with other factories across the country, Vinamilk is currently able to supply 5.1 million litres of liquid milk per day (equivalent to more than 28 million cartons of milk), meeting the needs of both domestic and export markets.

Meanwhile, Vinamilk’s Vietnam Powdered Milk Factory has two ‘giant’ drying towers as high as a five-storey building, with a design capacity of more than 160 tonnes per day, being able to meet the demand of nearly one million children every year. The factory’s UK automatic milk bottle filling system produces nearly 23,000 products per hour.

In addition to liquid milk, Vinamilk has held the leading position in the Vietnamese market for many years in the baby milk powder industry, which is also its export product with the largest turnover.

According to Vinamilk's 2020 report, the company has completed its plan of investing in machinery and equipment in the 2017-2021 period.

The production capacity of key product lines has increased by 60-80% compared to 2016 thanks to the continuous expansion of the scale, the installation of lines and the increase of the 13 factories’ productivity.

Besides Vietnam Vinamilk Dairy Factory and Vietnam Powdered Milk Factory - the two largest factories specialising in the production of liquid milk and powdered milk, other Vinamilk factories are all equipped with modern lines to produce a wide range of products such as yogurt, drinking yogurt, ice cream, fruit juice and condensed milk.

The highlight of Vinamilk's factories is not only in terms of capacity and output, but also the way they apply 4.0 technology to meeting many standards such as ISO 9001, FSSC 22000, and ISO 17025, in addition to special certifications such as Halal, European Organic, FDA (US) and Chinese standards, serving the domestic market and ready for international business expansion.

Vinamilk’s system of 13 factories connecting with 13 dairy farms across the country and distribution network, has really created a great strength for Vinamilk in the supply chain.

A Vinamilk representative said that in the coming years, Vinamilk will continue to invest in expanding and increasing the capacity of existing factories, while building three new modern factories to serve domestic demand and export, creating the driving force for development in the new phase.

At the beginning of this year, Vinamilk moved six places to reach 36th in the top 50 leading dairy companies in the world. It is currently the only representative of Vietnam and Asean in this list, according to statistics of the UK’s Plimsoll's. - Vietnam News/Asia News Network 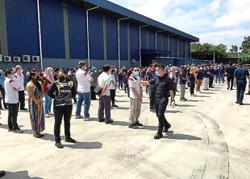