MANILA (Philippine Daily Inquirer/ANN): The Philippines’ trade in goods with the rest of the world rose 5 per cent year-on-year to $43.1 billion in the first quarter of the year amid an overall recovering global economy from last year’s pandemic-induced recession.

The latest preliminary Philippine Statistics Authority (PSA) data showed that merchandise exports from January to March grew by 7.6 per cent year-on-year to $17.6 billion, while imports were up by 3.2 per cent to $25.6 billion, reversing the 5.6-per cent contraction in external trade a year ago.

In March alone, total foreign trade climbed 22.5 per cent year-on-year to $15.8 billion, the highest value of exports and imports combined since the $16.3 billion recorded in October 2019.

Shipments of Philippine goods overseas jumped 31.6 per cent year-on-year to $6.7 billion in March, reversing the 1.5-per cent decline in the previous month and 15.8-per cent drop a year ago.

To recall, global trade plunged at the start of 2020, the Covid-19 pandemic outbreak forced many countries to shut their borders. The first lockdown in China, especially in its manufacturing hub, the province of Wuhan, dragged down world trade early last year.

The PSA attributed the exports recovery in March mainly to jumps in shipments of mineral products (up 195.8 per cent year-on-year), chemicals (up 159.8 per cent), and manufactured goods (up 115.7 per cent).

Imports sustained growth for the second-straight month, which at 16.6 per cent year-on-year to $9.1 billion, was faster than the 8.9-per cent increase in February. The value of imported goods that entered the country a year ago fell by 16.7 per cent.

The PSA said the top performing imports in March were food and live animals (up 30.9 per cent year-on-year); telecommunication equipment and electrical machinery (up 28 per cent); as well as mineral fuels, lubricants and related materials (up 21.4 per cent).

Economists mostly attributed the trade growth in March to base effects.

“It seems momentum picked up for exports and could be sustained since new export orders were up in April. Imports could soften in light of the ECQ/MECQ.

"However, the strong peso could hamper exports. [Further rise in] imports could be possible if the economy is reopened, ” Roces said, referring to more stringent enhanced community quarantine and modified enhanced community quarantine reimposed last month in Metro Manila and four neighbouring provinces, which accounted for about half of the economy.

For Pantheon Macroeconomics senior Asia economist Miguel Chanco, the jump in exports was “due, as the country’s shipments had been falling behind the recovery in international trade.”

The rebound in imports, meanwhile, “remains intact, and we see no clear evidence of any weakness — yet — against the backdrop of the country’s larger second wave of Covid-19, ” Chanco said.

“For the coming months, further pick up in imports and exports could also be supported by still near record low interest rates that could support greater demand for loans/financing for new investments that entail the more importation and also more export production as well as other business/economic opportunities in the supply chain and for related/allied businesses and industries, ” Rizal Commercial Banking Corp. chief economist Michael Ricafort said. - Philippine Daily Inquirer/Asia News Network 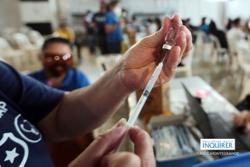