PARIS (AFP): French energy giant Total pulled adverts from Le Monde after it reported that the company was paying gas revenues to Myanmar's military through a tax haven, the newspaper said Thursday (May 6).

Total has come under pressure from pro-democracy activists to "stop financing the junta" since a military coup in February which has been followed by a brutal crackdown on dissent.

The company was due to run several adverts in the French newspaper over the coming weeks, but these were cancelled after it ran an article this week titled "Myanmar: How Total finances the generals through offshore accounts".

Le Monde said they had documents showing that Total operated a gas pipeline from Myanmar to Thailand through a joint venture with the military-controlled Myanmar Oil and Gas Enterprise.

The financial scheme, which also includes a Thai firm and US company Chevron, was registered in Bermuda, a tax haven, under the name Moattama Gas Transportation Company (MGTC) in 1994.

Total told Le Monde it does not know the "exact reasons" for incorporating MGTC in Bermuda three decades ago, adding that the company "no longer incorporates any new subsidiaries in tax havens".

But the result of the scheme "is that the colossal profits of the gas operations do not pass through the coffers of the Myanmar state, but are massively recuperated by a company totally controlled by the military," Le Monde concluded.

Total did not respond to a query on Thursday from AFP on its decision to remove adverts from Le Monde.

The newspaper was similarly punished in 2015 by banking giant HSBC, along with Britain's The Guardian, after they published "Swissleaks", a series of exposes on tax evasion.

Le Monde has succeeded in shifting its finances away from a reliance on advertising towards subscriptions in recent years, with adverts now accounting for around 22 per cent of its revenues. 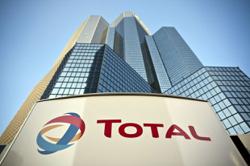