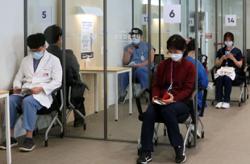 The country conditionally approved the use of COVID-19 self-test kits to beef up its testing capacity.

The daily caseload has been in the upward trend recently. The daily tally was in the 500s on Monday and Tuesday but jumped to the 700 range with 731 on Wednesday and 735 on Thursday, stoking concerns over another wave of the pandemic here.

Untraceable cases accounted for 29 percent of all cases reported in the past two weeks, the highest ever.

The country added three more deaths, raising the total to 1,811. The fatality rate was 1.54 percent.

South Korea last week decided to maintain the current level of social distancing rules through May 2 to contain the virus, although it placed more restrictions on entertainment establishments, such as nightclubs and bars.

The greater Seoul area, home to half of the nation's 52 million population, is under the Level 2 distancing scheme, the third highest in the five-phase system. The rest of the country is under Level 1.5, except for some municipalities that have adopted Level 2 measures.

Private gatherings of five or more people are banned nationwide.

Health authorities said a new social distancing scheme will be applied to North Gyeongsang Province for two weeks starting Monday before it is officially introduced in the country.

The authorities earlier unveiled that it plans to revamp the country's social distancing scheme from the current five-tier system to a four-level one with more detailed virus prevention guidelines.

To bolster the country's testing capacity, the drug ministry approved the use of COVID-19 self-test kits.

But the manufacturers of the self-test kits are required to provide additional clinical data within three months to get formal authorization for home use.

The authorities, however, emphasized that self-test kits should be considered a supplementary tool in testing the novel coronavirus.

There are currently 204 injection centers nationwide, but the country aims to have 264 centers by next week to speed up vaccinations.

A total of 13,011 cases of side effects after vaccinations have been reported, up 279 from a day earlier, but 98.3 percent were mild symptoms, including muscle pain and fever.

A total of 53 deaths after vaccinations have been reported, according to the KDCA, up one from the previous day, though authorities have so far ruled out links between the deaths and the vaccinations.

Health authorities are scrambling to secure more vaccines while trying to boost the nationwide inoculation drive.

They aim to inoculate 3 million people by the end of this month and 12 million by the end of June. By November, the country hopes to create herd immunity.

South Korea has said it has secured vaccines for 79 million people for this year, but uncertainty over its vaccine rollout schedule has been growing amid global vaccine shortage woes.

To solve the supply chain issue, the government is seeking a "vaccine swap" agreement with the United States and also reviewing the possibility of introducing Russia's Sputnik V COVID-19 vaccine.

Of the newly confirmed locally transmitted cases, 498 cases came from the capital area, with 198 from Seoul, 290 from Gyeonggi Province and 10 from Incheon, 40 kilometers west of the capital.

Of the newly confirmed cases from overseas, India led with nine, followed by the United States with six and the Philippines with five.

The number of seriously or critically ill COVID-19 patients was 127, up two from the previous day.

The total number of people released from quarantine after making full recoveries was 107,071, up 612 from a day earlier, with 8,576 people being isolated for COVID-19 treatment, up 182 from a day ago.