SINGAPORE, April 17 (dpa): Singapore's gross domestic product (GDP) grew for the third consecutive quarter, expanding by an estimated 2 per cent in the first three months of the year, the Ministry of Trade and Industry announced earlier this week.

Though the quarter-on-quarter expansion shows the city-state's economy is recovering from the impact of the coronavorus pandemic and related restrictions, it was down on the 3.8 per cent reported for the closing three months of last year.

The Monetary Authority of Singapore said the relatively slower growth "was largely driven by the construction sector, where activity continued to be capped by safe distancing measures at worksites."

Most of Singapore's roughly 60,000 confirmed coronavirus cases were among migrant workers, among them thousands of construction workers.

Year-on-year, the economy expanded by 0.2 per cent over the January-March period, after three consecutive contractions last year, the ministry said.

An April-June pandemic lockdown contributed to a second quarter contraction of over 13 per cent and a record annual fall of 5.4 per cent.

Other recent indicators show the city-state's economy to be bouncing back from last year's losses, with unemployment falling for 4 consecutive months to February and exports up by 6 per cent in the same month. 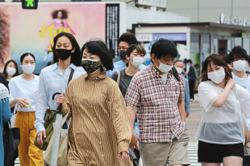